skip to main | skip to sidebar

We started working with the vocals at South Curve Studios. Mr. Herranen was kind enough to borrow some gear for us. We use AKG 414 mic and Portico preamp.

Our vocalist Ilpo became a father in the summer so we had a lot of catching up to do with the songs before starting the recordings. Album should be ready for mixing in the middle of September (fingers crossed), so we try to get the most out of the remaining recording days; Whenever Ilpo’s not around we try to record some synths and piano with Mari or backing vocals.
Lähettänyt The Chant klo 5.20 Ei kommentteja:

It was all work and no play for the next week and a half. We stormed through the rhythm guitar parts and started experimenting with different sounds and effects for the clean and lead parts with our producer Ville Sorvali. We usually recorded in the evenings after work and stayed at the studio until 2 am. Good times!!!


On Friday and Saturday we put in some extra hours. We started, as usual, after work at 5 pm. and recorded through the night. At 8 am on Saturday morning we decided to have a little break, so we slept on the studio floor for a couple of hours and started working on 1 pm … and stopped on Sunday morning.

Quest for the perfect guitar sound

We started our quest for the perfect guitar sound for heavier parts. My part was easy. I just plugged my Gibson SG into Hughes&Kettner Duotone, fixed a little bit of gain and EQ and the sound was there, approved by Mikko Herranen.

After that it was Kimmo’s turn. We needed to find the sound for his 7-string Ibanez but it turned out to be a bit more difficult. We used MesaBoogie Dual Rectifier but we couldn’t get enough attack and punch to the sound. After experimenting a while we decided to boost the sound with legenderic Boss’ Super Overdrive and finally found the sound we were looking for. We had some problems with the drum tracks so we got the rhythm guitar parts finished for just one song. 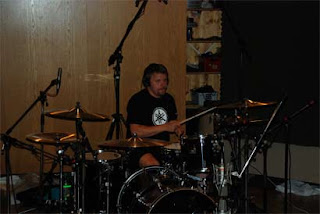 Mr. Mikko Herranen, who's going to mix the album, took care of the sound check. We used two bass drums lined up (a new thing for us;) to get a thicker sound and we also ended up using a lot of ambience mics to capture the sound of the recording space.


The time allotted for achieving this incredible task was two days. Robu ended up recording six out of nine songs during the first day alone... which was nice:) On the second day we had plenty of time to try out some different sounds for particular song parts.

On the 10th of August we're heading to Drop Hammer Studios and start working on guitars and bass.